The musical that goes to the discovery of Neverland! 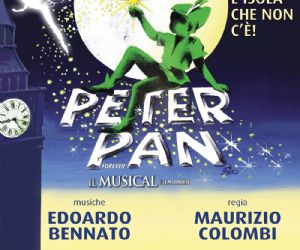 That's the big surprise of this season at the Brancaccio Teather: after the incredible success of the past editions, the new adventure of "Peter Pan - The Musical" begins in Rome on February, 23.
The show has already fascinated thousands of spectators and has won prestigious awards such as the "Premio Gassman" and the "Biglietto d'Oro" as the most watched show in the theater seasons 2006/2007 and 2007/2008.
20 performers, directed by Maurizio Colombi, recreate on the stage a magical world, in a magical atmosphere: Peter Pan will fly well above the audience, the audience will call loudly Tinker Bell with the thrilling scream "I believe in fairies" during the duels with the pirates of Captain Hook.
Based on the novel by James Matthew Barrie who has enchanted generations of children and adults, Peter Pan - The Musical is not just a play, but a real dream to share with the whole family: a journey to Neverland, a fantastic adventure among Indians, lost children, fairies and pirates.
The extraordinary soundtrack of this trip is composed by some of the most famous songs of Edoardo Bennato.