Marchette in trincea (Work in regress) 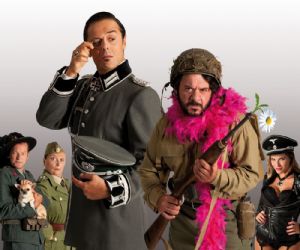 A mis-matched theater company is on stage with a horrible German comedy about the invasion of "43. The absence of the public, so the box office, does not grant the ability to pay a mortgage on for the set up and an officer judicial starts to seize costumes, lights and effects, dragging the play into a maelstrom of minimalist involution. Shortly before the disaster, the saving advent of a German entrepreneur returns the glories never expected. the new, however, manufacturer, claims the inclusion of advertising and a better role for the actress who loves. the new changes of the show enthuse critics, who see in the show a ferocious satire.
The keystone is a bizarre financial advisor who will determine the ultimate, absurd change.
After fourteen years the two humorists work again on a comedy by Greg and together they dismantle and assemble it again, renaming it "Marchette in trincea". We are always in the sophisticated terrain of the meta-theater , much loved by Lillo & Greg.
And it is a very fertile field to convey their humor and simultaneously desecrate the often squalid dynamics, that animate the world of entertainment: the rivalry, the greed of money or career, pseudo intellectualism, the hypertrophic ego, the false idols, hypocrisies and the dogma number one: the force that moves the universe, the one due to which the oxcart always succumbs.

The show is strictly forbidden for children under 3 years.