Boys as light as rags 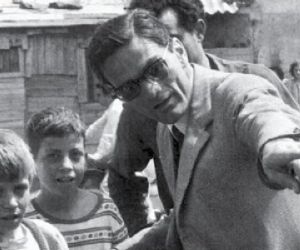 Pier Paolo Pasolini from the working-class suburb to the writing workshop. Permanent exhibition space
From 04/11/2015 to 31/12/2019

On the occasion of the 40 anniversary of the death of Pier Paolo Pasolini and within a  large project of enhancement of the twentieth century heritage developed with Spazi900, the National Central Library of Rome, for the first time in Rome, dedicates a new permanent space to the writer.
Along an high visual impact exhibition itinerary divided into different spaces, with "Boys as light as rags" Pasolini ideally put himself in touch with the villages and the characters that populate his literary work; the same ones recreated and told through his novels "Ragazzi di vita" and "Una vita violenta", and with his movies "Accattone " and "Uccellacci e uccellini".
The writer meet his boys "as light as rags" in places of conviviality. On one side the "piazza" (the town square) with the tables of the bars, center of social life of the Roman suburbs, on the other side the football playing field.
The background shows the urbanizing farmland with a lot of under construction buildings.
From outside we enter through the arches of the aqueduct, thus entering the closed and protective environment of the house.
"Long walks under a warm haze" are followed by "long lasting twilights in front of the cards."
The landing indeed is the writer's laboratory among his papers held by the National Library, which was attended by Pasolini himself: the two novels, the tragedies, Passion and ideology, the dream of one thing, Project for a movie about San Paolo, The new youth, The Divine Mimesis, Lutheran Letters.
It is one of the most important funds related to contemporary literature owned by the Institute together with that of Elsa Morante, two names linked by a deep friendship and by a continue dialogue.
The papers of Pasolini, donated by his heirs in 1977 and in 1996, along with those he sent to Enrico Falqui and kept the critic's archive, make the library one of the most important places of preservation of his works, demonstrating his multifaceted activities: from fiction to poetry, theater, films, critical writings and interventions in the newspapers.
In collaboration with the Central Institute for Sound and Audiovisual, the exhibition will be enriched by visual contributions. A film festival related to the exhibition will be organized for the schools with the aim to examine in depth the the cinematic arts of Pasolini tied to Rome and its suburbs. The movies that will be shown are: Accattone, Mamma Roma, La ricotta e Uccellacci e uccellini.  Some documentaries will be also available in a designated video post.

Under this project, the National Library in Rome will work with the DG Education and Research of the Ministry of Heritage and Culture and Tourism to engage schools in an educational path focused on the reading of the two novels by Pasolini Ragazzi di vita e Una vita violenta. The project will enable the creation of creative products - audiovisual, multimedia, theater - by the high school students focusing on the relationship between Pasolini and the Roman suburbs.

The Library also offers a staged reading of Pylades by Pier Paolo Pasolini in collaboration with the Centre for books and reading and the Association Frascati Poetry.
The drafts of that drama are stored in the Institute together with other tragedies. Directed by Graziano Piazza, with the presence of the actress Viola Graziosi, the reading becomes an experimental laboratory with the involvement of some high schools from Rome, refelcting on the political factor inside the theater of Pasolini.

To accompany the permanent exhibition dedicated to Pasolini, the National Library in Rome is hosting an exhibition of photographs taken from the Archives of the Roman suburbs Rodrigo Pais, preserved at the University of Bologna, titled The photographer in the suburb.
Shots from the archive of Rodrigo Pais, by Guido Gambetta and Glenda Furini.
Photojournalist in account of several major newspapers, Pais was born in 1930, in 1954 he started working with "L'Unità" and "Paese Sera".
Through 60 images, selected from the thousands of Pais, the exhibition will illustrate the living conditions in the villages and slums of Rome during its expansion and more and more covered by cement.
Exactly the suburbs of Pasolini's "boys of life" that aroused the interest of intellectuals and writers of his time.