An evening with Joan Baez

Joan Baez, one of the greatest female voices of all time, returns to the Parco della Musica 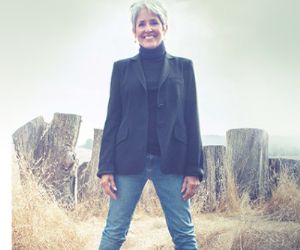 Joan Baez, one of the greatest female voices of all time, returns to the Parco della Musica
18/07/2016

The American singer has received numerous awards and accolades after the celebration of the 50th anniversary of her legendary performance at Club 47 in Cambridge, Massachusetts, in 1958 and the historic debut at the 1959 Newport Folk Festival. Her successful albums have recently been republished, with her notes in the margins, her his autobiography "And A Voice To Sing With".
Joan Baez is one of the protagonists of the Martin Scorsese documentary on Bob Dylan's career, "No Direction Home" and "The Other Side of the Mirror: Bob Dylan Live at the Newport Folk Festival, 1963-1965".
In addition to many tours in the US and worldwide, 2011 saw the entry into the prestigious Grammy Hall Of Fame of her first album, published with Vanguard in 1960.
In 2012 she was given the prestigious award by Amnesty International for her commitment to the cause of Human Rights. In 2011, she was awarded the Legion of Honor, the highest French award.
Icon of pacifism and civil rights, the nightingale of Woodstock, ranging from folk, rock, pop, country and gospel, has never abandoned, neither for a second, a commitment to the causes of the weak and the oppressed ones. In this troubled world, to paraphrase "Wings," Joan Baez "continues looking for a place where to be heard while singing."

An event of: Luglio suona bene - July sounds good in 2016


For a complete schedule, visit the '[url = http: //www.oggiroma.it/eventi/anteprima-concerti/] preview concerts in Rome [/ url] in the dedicated section.