"Via!" –Street Photography from Hamburg to Palermo

Ten photographer, five in German and five in Italy, during one year have photographed their city 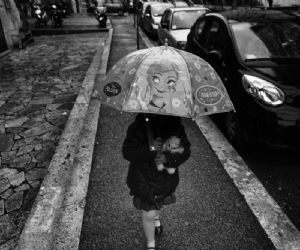 The exhibition is the result of a photography progect that started in 2014 by Goethe- Institut. Ten photographer, five from German and five from Italy, during one year have photographed their city following the principles of street photography. Created and defined by the works of Henri Cartier-Bresson, Elliot Erwitt, Robert Frank or Alex Webb, this genre lives thanks to the spontaneity and fleeting moment.

The pictures in the exhibition are shooted from Hamburg to Palermo through Berlin, Naples, Augsburg, Treviso, Bologna and many others italian and germans cities. Thanks to the different photographer's point of views is born a collection about everyday photos .
Some of this pictures, abstracted from the site where were shooted,possess an expressive force that is unique. Instead,in others the details, the light or the person who in represented are traces to understand the site of the picture. Full of humor, scurrilous, touching, enigmatic or confusing, photographs disclose the geographical significant, social and cultural rights of the individual regions.

The "Via!" team is composed by : from German Fabian Schreyer („The Street Collective") from Augsburg,the member „In-Public" Siegfried Hansen from Hamburg, the photographer Guido Steenkamp, Marga van den Meydenberg, oland photographer and also the member of "Observe" Michael "Monty" May di Iserlohn. Italy is represented by Umberto Verdoliva („Street Photographers", „SPontanea") from Treviso, Mary Cimetta from Bologna and Stefano Mirabella from Rome (both „SPontanea") and Michele Liberti („EyeGoBananas Collective") from Naples and Giorgio Scalici from Palermo.

The tickets office closed at 7.00p.m
For many infos consult the website