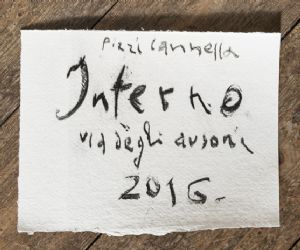 Solo exhibition by Pizzi Cannella and fifth exhibition of the project created by Marcello Smarrelli, on the occasion of the 10 years of the Pastificio Cerere Foundation and of the 110 years since the construction of the building in which the factory is established.
The project, composed of 6 shows, pays tribute to the protagonists of the creative and artistic ferment that still animates the cultural life of the former pasta factory: Ceccobelli, Dessì, Gallo, Nunzio, Pizzi Cannella and Tirelli. These six artists, also known as "San Lorenzo Group", were the first to recognize the potential of this former industrial space, deciding to transfer here their studios since the Seventies. Thanks to them the Pastificio Cerere has become a place of production and dissemination of contemporary art at an international level, still contributing to the formation of new generations of artists.
"Interno Via degli Ausoni" tells a journey of lights and shadows drawing the plot of these places, the volumes of the architecture, the images of the passed years inside the factory. The artist, with the help of the imagination, leading us in the space where he is been living and working since thirty years.

Biographical notes
Pizzi Cannella was born in 1955 in Rocca di Papa (Rome). He started painting when he was a child. From 1975 he attended the Academy of Fine Arts in Rome and, at the same time, he sudied Philosophy at the University of La Sapienza. After the first conceptual experiences, in 1978, he made his first solo exhibition at the Galleria La Stanza of Rome. In 1982 he established his studio in the former Pastificio Cerere in the San Lorenzo district, founding the school of San Lorenzo with Bruno Ceccobelli, Gianni Dessi, Giuseppe Gallo, Nunzio and Marco Tirelli. He first opened his studio for the public during "Ateliers", the exhibition curated in 1984 by Achille Bonito Oliva in the pasta factory